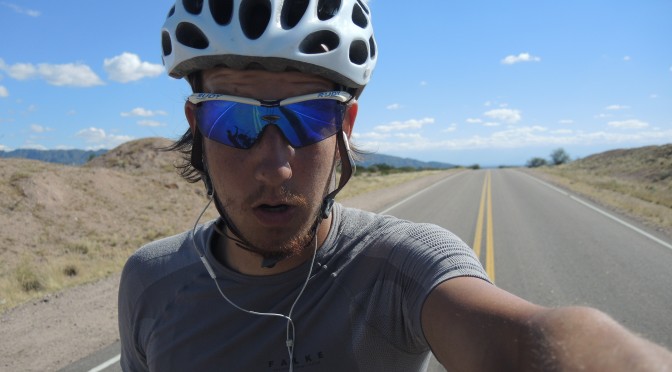 After some nice resting days in Mendoza it was time to hit the road again. I wanted to go back on some ripio road to maximize the adventure, but it didn’t worked out that well. I saw a road on a random map which didn’t showed up in all those maps I had. A quick check in Google Earth confirmed me in my decision to try this “road”. But after tough 20k, I had to run around. It was just impossible to ride this road. Maybe with less things on the bike, and more patience in pushing the bike…

The alternative road wasn’t bad at all, and so I had a nice straight road ahead of me while riding into the sunset. I asked at the park ranger site for shelter and they gave me one, which was all I could imagine.

Good shelter, good sleep and the first pass ahead. Endless turns but enjoyable steepness. On the way up I met two swiss fellows and we rode together to Uspallata. As usual in the Argentina the municipal campsite was the place to be.

I really enjoyed the next days, and it was definitely better to choose the way via Uspallata, Calingasta, Las Flores and San Jose de Jachal instead of riding the Routa 40 to San Jose. Even some parts on my route where mind wise really hard to ride. Endless strait roads, burning sun, no traffic, just adventure. I was really glad to bump into three other cyclists the other day when I camped behind a gas station. To grab a beer or two, make a barbecue, drink mate and to have some company for the evening. Not to talk about why you are cycling, how much the bike costs and those kind of questions but to talk about routes, stories that happend to us or just anything else.

Because they wanted to ride the Passo Aqua Negro, which is leeding torwards Chile, I was on my own again. Bit after 100k I thought about autostop, because the road just didn’t changed, and when I looked into the map, I was sure that this would go on for another 100k. After another 20k or so, I had luck. I ended up in Villa Union this day. The next days, basically nothing happend. I rode through Chilecito (most ugliest hostal), did a 200k ride and a couple of 100k rides and finally arrived in Cafayate.

From there the road changed instantly. Riding along a river through a stunning valley with all kind of stone formations is definitetly not as exausting as the days  before. After two days I arrived in Cachi, which was my long time milestone since Mendoza. Cachi is a relatively big village, but small compared to Cafayate. It has a touristic infrastructure but mainly for Argentinians. I camped on the the municipal campsite and met two argentine athlethes. Cachi is perfect for altitude training! I had days off, for resting, having asado and preparing the next weeks.