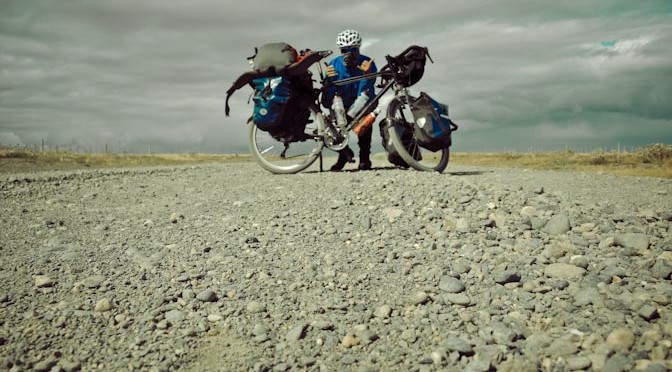 No sooner said than done, my first task after my failed calculation about needed food/day, I had to do a 30k detour to Rio Grande. Before I arrived in the center of Rio Grande I saw a guy playing a trumpet in a field outside the town in an industrial area. So I stopped and listened. He immediately started a conversation and after the “traditional” questions Wherefrom, whereto and which country, he insisted in showing me the way to the next supermarket by driving his car in front of me.
Well, I didn’t said no, but was very happy! On the way, while clinging on his open window, I found out that Juan (Trompetplayer) was practicing for a performance with his Ska-Band. He also runs a Musicstudio in Rio Grande.
Back from Rio Grande againg, I had the pleasure to experience the fist time of my live the one and only famous and often mentioned roads of Patagonias – thw “Ripio”. Quasi gravel road, mostly no smooth gravel, but proper stones :). This day I had tailwind which made that ride really endurable.

Due to the fact that there was only one estancia far and wide marked in my map, I did cycle to that one. I thought that there might be a good sheltered spot for my tent. Unfortunately the local gaucho said quiet cleary with “no permisso” that there was no place for my tent. Well, ride on….At least I could calmly cook my dinner there. After a few more kilometers, I finally found a great spot in the midst of a dead standing forest.

The next day started with moderate headwind, which increased in course of the day, while my stenght decreased a lot faster. 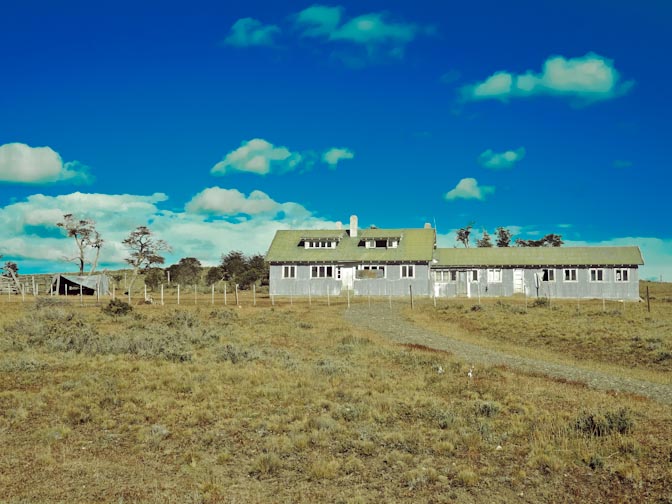 At met four Chilenian guys, during a break, the border of Argentina/Chile. They hitchhiked through Patagonia. During that day I’d overtook them a couple of times, while they were waiting for a car. That was a welcomed change, compared to the deserted pampa. At the night, after I’d pitched up my tent in the delta of Rio Grande, the guys where walking towards me. That resulted in a very social night at the campfire.

The cycling the next day consisted, caused by wind and road condition, only pushing the bike, short breaks, long breaks and shortest cycles. After the wind increased it wasn’t even possible to push the bike. So I stayed at a shelter and waited and waited. 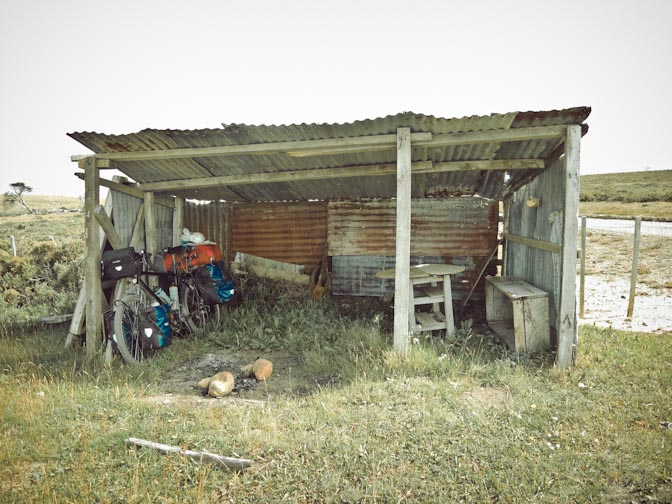 The wind decreased the last days after 6pm and that happend also this day. I was able to cycle kilometer after kilomter, and happily but totally exausted I reached the tiny town Cameron, which is directely located at the Magelan Canal. Directely insided the town I could pitch my tent, and after not even finsish to put all my stuff inside the tent, some locals offered me mate tea at there house.

The next Morning the road was more varied and nicely located along the Magelan Canal. After visiting a Pinguin Colony and pasing the first Estancia of the Mendez Dynasty, which made a sad impression, abandonment and declined, the joy of tailwind had a abprut end.
As soons as I turned 90 degree right onto the road to porvenir, which had much more traffic, the wind won again.

In the retrospective that was definitely my hardest and exausting day in the pampa! This time the road consisted of smooth gravel, which was only cycleable on a thin track. As soon as you leave the thin track, the frontwheel basically slided away. I am sure it would be entertaining for somebody to watch the whole procedure of trying to keep the track, small changes of wind and as a result beeing somewhere but not in the track trying to push the bike back on the track. And then again….The worst was that this road was 60k straight with no shelter inbetween. After Arnold, motorbiker form Netherlands, told me that another cycler from the UK maybe 30 min in front of me had the same trouble, Ihad a goal in my eyes. I tryed to close the gap. And finally after 60k I found the campingspot of Dave, UK, right at the junction to Provenir. May I introduce: Dave, UK, (Facebook: ThecyclingHobo) Did start in Ushuaia and will cycle to Mendoza before he’ll cross back to Buenos Aires. For him as well this days was the hardest day so far. 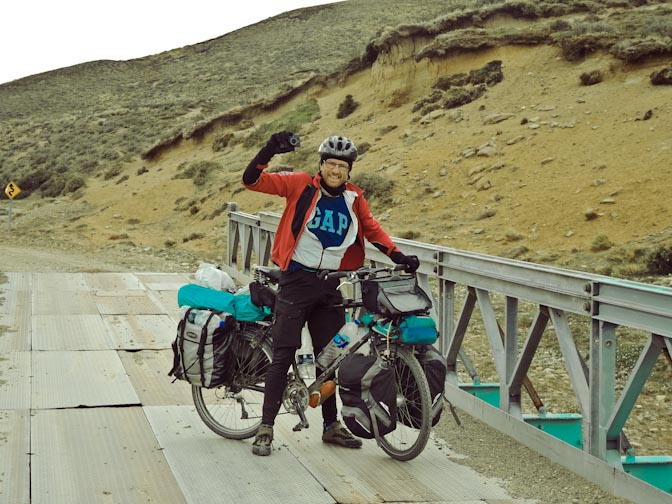 We decided to cycle together to Porvenir the next day – back into civilisation. We did choose the road over the mountain to have a change from the pampa. On the way where a lot of old machineries from the goldrush times. After arriving at the highest point of the day we rewared ourself with a big break. During this break we met a Chilenian Cyclist, who was going south. By instance he had athopian coffee with him, but no coffee filter. As it happens sometimes, Dave had a proper coffee filter, but no coffee

As a result we could enjoy a perfect coffee. We felt like kings! 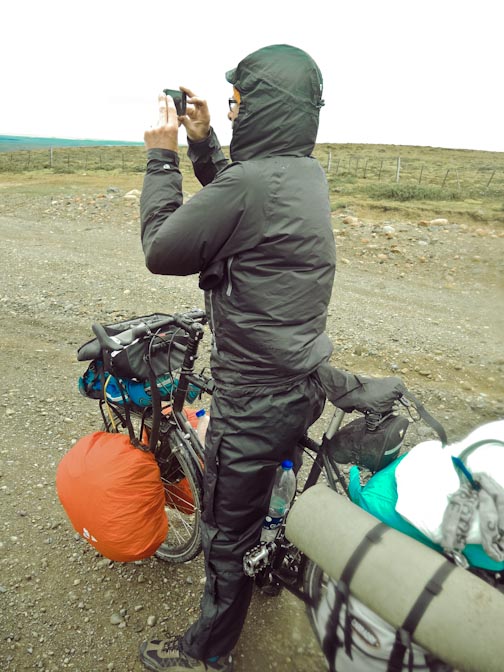 Since we were on the top, all the coming way was downhill. Five hard days were behind us and Provenir ahead. Of course we tested a lot of sweets of the local supermarket in Porvenir. Unbelivable how fast it is possible to choclate after such days.

We took the ferry to Punta Arenas the next day and we decided to cycle together the following days.