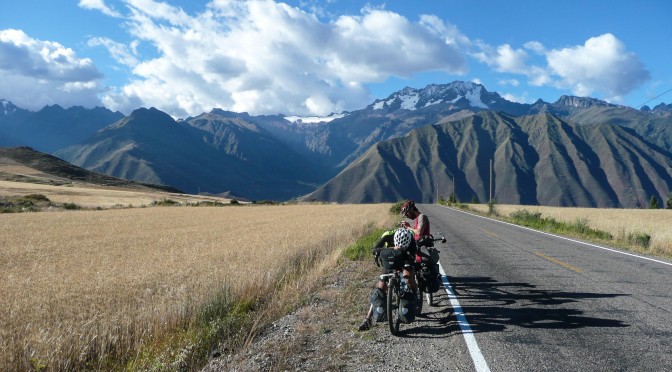 I left La Paz together with Sabine and Christian on a beautiful sunny day. We decided to ride together torwards Cusco. We reached Lake Titicaca where we cycled along for the next two days. In Puno we made a sidetrip to the flooting islands and decided to take a bus to Cusco to avoid busy altiplano road. I planned to ride the Great Divide of Peru, which is really good descripted on AndesbyBike, and so I changed my tires in Cusco. We decided to continue together at least until Abancay, where my route would take me to more remote tracks.

We continued with a loop through the Sacret Valley of the Incas including a lot of sightseeing. Orginally we wanted to ride/hike to Machu Piccu aswell, but we found another with Choquequirao an  alternative inca site which was more promissing to us.
After a really long decent down to the River Apurimac, just to cross it, it was two ascent to the highpoint of the Pass that leads to Abancay. There we turned right direction Choquequirao, which are the most remote Inca ruins, and only reachable by a two or three days treck. We left our bikes in a hospedaje and hiked to Choquequirao. Besides mosquitos, which went mental, Choquequirao was definitely the most impresive Inca ruins I saw. The good part of a two days hike is, that there are no people, and compared to Maccu Piccu you are able to move freely and do what ever you want to do. It is even possible to camp at the ruins.

After the hike we had a day off in Abancay and Sabine and Christian decided to follow me onto the Geat Divide. A day on a busy highway torwards the sea lead us to a dirtroad turnoff which brought us to a very remote area of Peru.  The following days we were regarded with a fantasic landscape, besides it was definitely not easy cycling. Either it went up or down, no plane strechtes at all. Unfortunately on the way to Vilcashuaman, we had on both bikes several punctures and to make the day perfect, the tandem freewheel broke and I got pain in my hip. Wouldn’t have been that worse if we would have had water to make camp and continue the next day, but we hadn’t. So we pushed our bikes around 8k and 600hm into the next village. As we got there it was already night. A very friendly local allowed us to camp in his backyard. He also told us that there would be a bus on the next day at 4am to the next biggest town. To make it short, there was a bus, but we didn’t fit in. Besides that I got really sick during the night, and wasn’t able to do anything because of weekness. While Sabine took care of me, Christian organized a “taxi” by cycling to the next village. I was so glad to have Sabine and Christian around me! The taxi eventually brought us to Vilcashuaman, were we had some rest days. Vilcashuaman was really enjoyable after I had improved. Sadly we had to split up, because they had to get to a bigger city to get their freewheel fixed, and I really wanted to continue on the Great Divide. We came along quiet well, and shared alot of nice and funny moments, so of course it was a strange feeling continuing solo the next day.