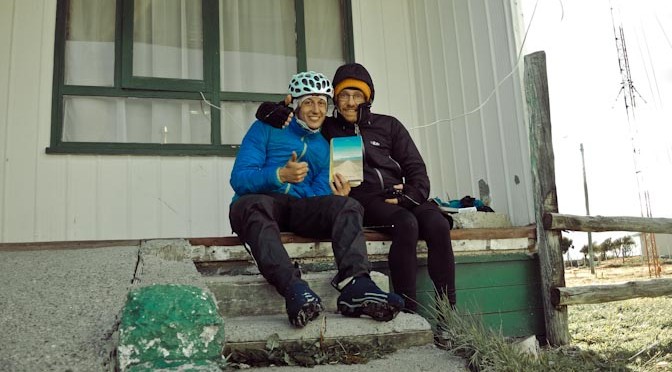 After a nice restday in Punta Arenas, we were back on the bikes. The first 20-30k went really fast. But after leaving the bigger area of Punta Arenas the wind stopped us. Heavy sidewind made it impossible to ride. Not only once we were pushed into the ditch. Overtaking buses and lorries didn’t made the situation easier. We found a shelter place in form of a garage. After both of us had a short “powernap”, we started a new attemp.

But also this attemped failed and we used the first occasion that came along to stop. The police station was perfect. Books or Kindle were taken out and while reading,  listening to Musik and trinking Coffee (thanks Policeman) we were waiting for better times. The wind decreased after 7pm and we rode on.

At the junction, where we wanted to turn the next day, we found a shell which was just perfect. In case of site and in case of not needing to pitch the tent in the morning.

We managed to ride into the sunrise this day! Riding into a sunrise on a rupio… definitely a recommendation! 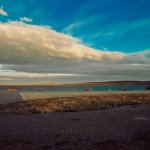 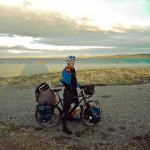 Today’s day was a little detour. We could have stayed on the asphalt road which goes direction Punta Natales. The ripio we have chosen made a little curve passing the village Rio Verde and going along a lakeside before it went back to the asphalt road. Rio Verde suprised us with free coffee and open WLan.

Back on the asphalt road we meet Emil and Johanna (Sweden, www.thebigtrip.se) and Garry (UK). They were on the same way than we were. We decided to spent the night together in Villa Tehuelches and after a quick chat with the local police, we where allowed to camp in a horse stable. 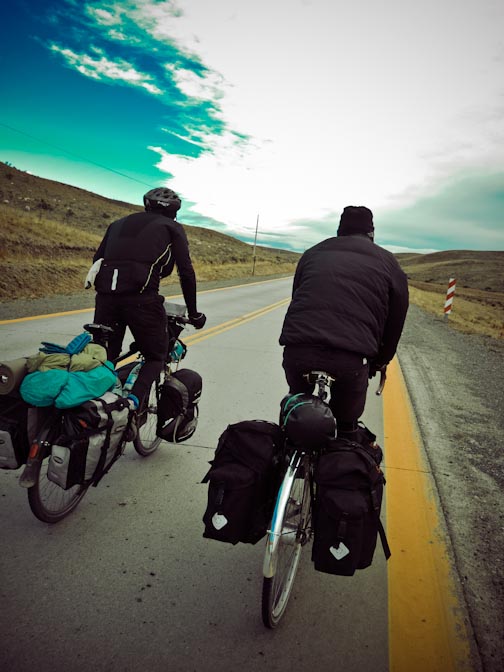 Punta Natales was a really curious place. More a transit place than a place with a existing community. All kind of traveler came together to equip for the following hike in Torres del Paine Nationalpark. Also we did use our restday to plan the hike. Before leaving our bikes where heavily load with food.