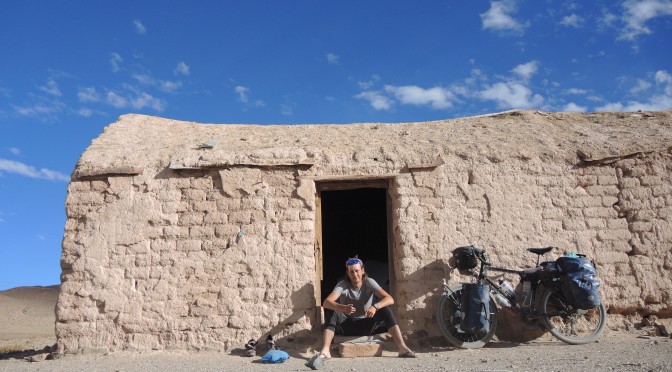 It was a strange feeling for me to leave Cachi. I spend hours the last weeks, reading my roadbook again and again. I found a really promizing route through the south of Argentina and the final border crossing to Chile. It included the highest pass of Argentina and some really remote passes for the boarder crossing. I was so exited that I just read the roadbook over and over again, after lunch hanging around in the tent. But with leaving Cachi it was actually at the point where I decided not to go to easy road torwards Salta, but take the hard way to San Pedro de los Cobres. Because I wanted to cycle the Pass in one day, and not to camp somewhere in last third of it, I had a easy day to La Poma.

I was lucky again, and the local Police let me stay in one of their rooms. They weren’t amused when I told about my plan to ride solo over Passo Abra el Acay (4972m).  So I had to promise to make a radio call as soon as I get to San Pedro de los Cobres. I couldn’t sleep that well the following night, having nightmares about not making it to the highpoint. Early morning start in the dark, and then a steady climb along a river. Unfortunatelly the valley got smaller and smaller, and the road crossed the river a couple of times. I had to break the ice first to cross it, and after the third time standing knee high in the water I could not feel my feets anymore. After hours and hours of heavy climbing, and stronger winds, I finally reached the top. What a feeling!

I thought I am done for today now comes the easy part and I just freewheel down to San Pedro de los Cobres. But I forgot the wind, which, of course, got stronger and stronger. The last 10k did take me two more hours of pushing and trying to cycle. As promised I’d made the radio call and the local police invited me one more time. I could shower, use the internet and cook in their kitchen.

Two days later I was ready for the next part. It was the most remote part I did rode on my whole trip through Argentina. No cars and no water along the road. Two small villages with basic supply and a couple of high altitude passes between 4000 and 4700m. It was definitely the most exausting but most adventures part of my trip. The endless and stunning landscape was it all worth.Washboard and sandy roads made it really hard, and besides that I had a food poisoning on the second day. Luckily I could stay at the boarder control until I got better. How happy I was when I saw the welcome sign at the chilenian side. The endless ride down into the Atacama dessert and the 60k stretch on the edge of the dessert to San Pedro de Atacama was so different to the last days. Really warm, no wind, and asphalt. I stayed a few days in San Pedro de Atacama to rest a bit and  prepare the Lagune route.